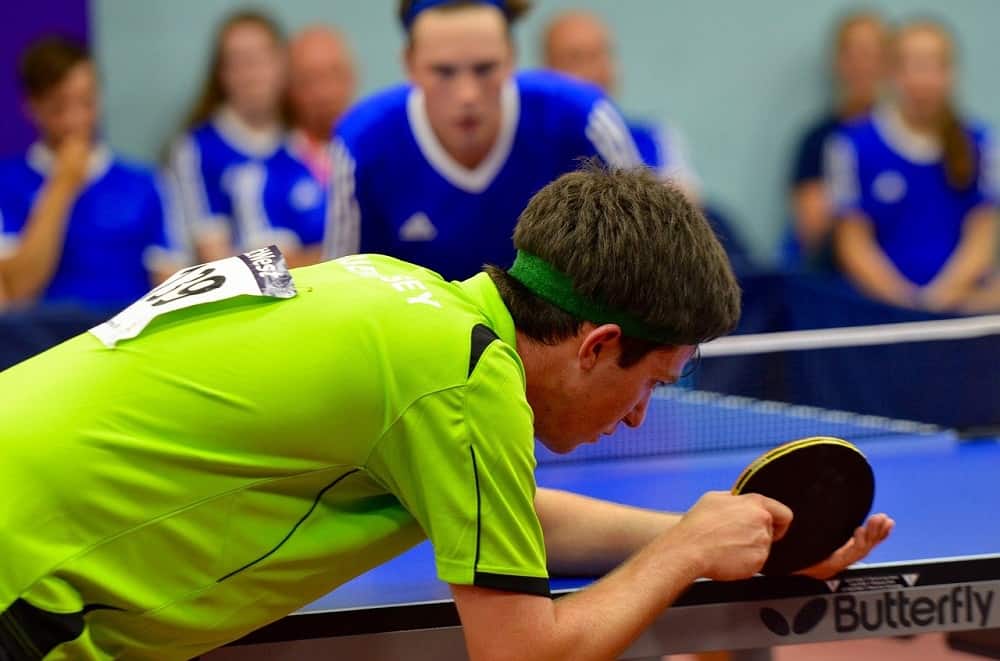 Table tennis, ping pong, or whiff whaff is one of the most common sports on the planet. A lot of people practice the sport either professionally or casually with friends.

It’s a highly beneficial form of exercise that’s great for social bonding, strengthening your arms, and improves your brain and hand coordination. But have you ever asked yourself “is table tennis aerobic or anaerobic?”

According to science and based on what you do while playing table tennis, it’s safe to assume that table tennis is an aerobic exercise, or at least has more aerobic character than anaerobic.

Read on, if you want to learn more about the table tennis physiological demands and what it does to your body!

What is the Difference Between Aerobic and Anaerobic Exercise?

Before going in-depth about table tennis, and whether it’s aerobic or anaerobic exercise, we should first discuss the difference between the two terms.

The word “aerobic” comes from “aero”, which means “air”, which refers to the body making use of the energy by consuming oxygen.

Aerobic exercises involve the heart and cardiovascular system in the exercise by increasing the heart rate as well as the rate of breathing to get more oxygen as you continue to exercise, which is why they are also known for their other name “cardio”.

Aerobic exercise usually involves spending longer than two minutes doing the same exercise, which is usually performed at medium or a sustained effort. This is known as “submaximal effort”.

On the other hand, “anaerobic” simply means “without air”. Or in a simpler term, without relying mainly on your heart or breathing rate.

In an anaerobic exercise, you do a quick and short burst of energy, which is usually very intense and performed at your maximum level of effort. This is known as “maximal effort”.

Both forms of exercise are extremely beneficial for your body health but in different ways. To determine which type of training is the right one for you, you should keep your fitness goals in mind.

So, Which one is Table Tennis?

According to a study that reviews the physical demands of the sport, almost all scientists and researchers around the world believe that table tennis is mainly an aerobic sport.

However, it can also carry features of anaerobic exercises too, especially during foo movements.

To put that in simpler terms, while practicing table tennis, you usually spend a lot of effort for a period longer than two minutes. As a result, you start to feel that your heart is beating faster, and you’re gulping larger breaths.

Instead, you’ll notice that table tennis players start to run around and spend sudden bursts of energy, reaching their maximal level of effort to reach the ball.

They would also use their swing power at maximum energy sometimes to serve a quick shot. All these are forms of anaerobic exercise.

So, if you want to practice table tennis, you would need to have high levels of endurance as well as sustaining a median level throughout the length of the game.

What Are Some Examples of Anaerobic Exercise

Although most sports will likely count as mostly aerobic, there are a few exercises that are known for being purely anaerobic.

By knowing and connecting these forms of exercises to each other, you’ll figure out why table tennis isn’t an anaerobic one.

All these exercises have a common characteristic feature, they all involve exerting almost 100% of your effort at once and for a very short period of time.

Why Aerobic Endurance is Critical for Table Tennis

However, it’s also noticeable that long-term endurance that allows the player to sustain their speed and intensity is the major factor for playing the game.

Ideally, a table tennis match is the best of 5 games, if you want to play table tennis, you need to have the aerobic endurance to handle the repetitive movement and sustain a consistent release of energy.

Is Table Tennis a Good Exercise?

Table tennis requires aerobic endurance as well as bursts of anaerobic maximal effort, so it’s a highly versatile form of training for your body.

Also, it sharpens your body reflexes and enhances the coordination between your brain and hands.

Table tennis is one of the unique forms of exercise that require both maximal and submaximal endurance to perform.

If you practice table tennis the way you’re supposed to play it, which involves following the ball as well as hitting it using your maximum swing power, this will use both your aerobic and anaerobic endurance.