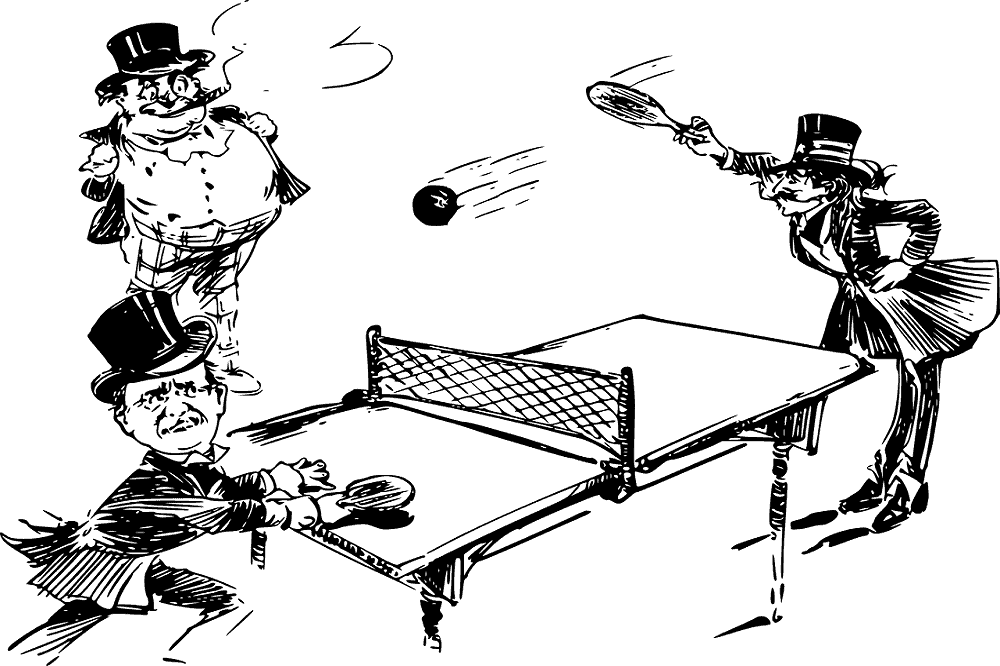 Whenever we mention table tennis, China is, deservedly, the first country that pops to mind. Chinese players have gathered more than 85% of the total gold Olympic medals, which forces people to think that they’re the ones who invented the game.

In reality, table tennis was conceptualized in England by David Foster in 1890. The official arrival in China happened about 60 years later, in the 1950s.

In this article, we’ll hop into a time machine to see how table tennis evolved into today’s beautiful game. All aboard!

In the 1870s, lawn tennis was pretty popular in England. People wanted to enjoy it all the time, but cold weather often got in the way. That’s when David Foster, an English merchant and politician, decided to invent a parlor version.

As expected, his first version was strikingly different from today’s game. The rackets had strings, the ball was made of rubber, the net was a solid wall, and the table was fenced with a full wooden frame and long side nets.

Because Foster’s idea was quite unique at the time, he had it patented in 1890, which makes him the official inventor of table tennis. In the next year, Emma Barker filed for an American patent to document two new features: the mesh net and strapped rackets.

From Ping-Pong to Table Tennis

The British company Jaques of London was the first manufacturer to use the term Ping-Pong in 1901. Nobody knows why they chose this name, but most people believe it was a catchy way to market how fun and fast the game was.

A couple of years later, Parker Brothers brought Ping-Pong to the US. In the 1920s, they officially replaced that name with “table tennis.”

A New Ball Changes the Game

Before 1900, people played table tennis with rubber and cork balls, both of which gave hideously random bounce.

These two inventions made the game so fun that skilled players taught their techniques in several books. As more people jumped on the bandwagon, tournaments started to emerge.

England took it upon itself to make table tennis a global game, so it started the first official association in 1921, which lives until today as Table Tennis England.

By 1926, the game did go global, prompting the release of the International Table Tennis Federation (ITTF). The participating countries at the time were:

The World Table Tennis Championships began in London in December 1926, although Berlin had already hosted the first international tournament in January the same year.

Even though the game was already famous in the USA, the USA Table Tennis Association came to light in 1933.

When China Took a Liking for the Game

At the start of the 1950s, the People’s Republic of China (PRC) rose to power after a long civil war. Ivor Montagu, the British founder of the ITTF, communicated with the Chinese leaders to arrange their first official introduction to the international rules of table tennis.

The Chinese people had a raging passion for the game. Several books say that you could see table tennis played in factories, schools, gymnasia, and almost everywhere.

To further promote China’s growth, Montagu held the 1961 World Championships in Beijing. Ever since, the Chinese players have shown unparalleled performance. Today, Ivor Montagu is acknowledged as the Godfather of Chinese Table Tennis.

Between the ‘50s and ‘80s, the paddles were constantly changed to introduce new aspects to the game.

One of the most notable changes was the use of speed glue, which improved speed and spin dramatically.

By 1988, table tennis appeared for the first time at the Olympics held in Seoul, South Korea.

Improving the Rules for Media Adaptation

Although table tennis had excellent popularity at the time, it was too fast to watch on TV. That’s why the ITTF made the following changes:

Who invented table tennis? It was an English merchant named David Foster.

Where did it originate? In Victorian England, back in 1890.

Many things have happened since then. Surprisingly, China didn’t get to participate in official competitions until 1961. However, after hitting the jackpot year after year, they showed everyone who’s the real boss!