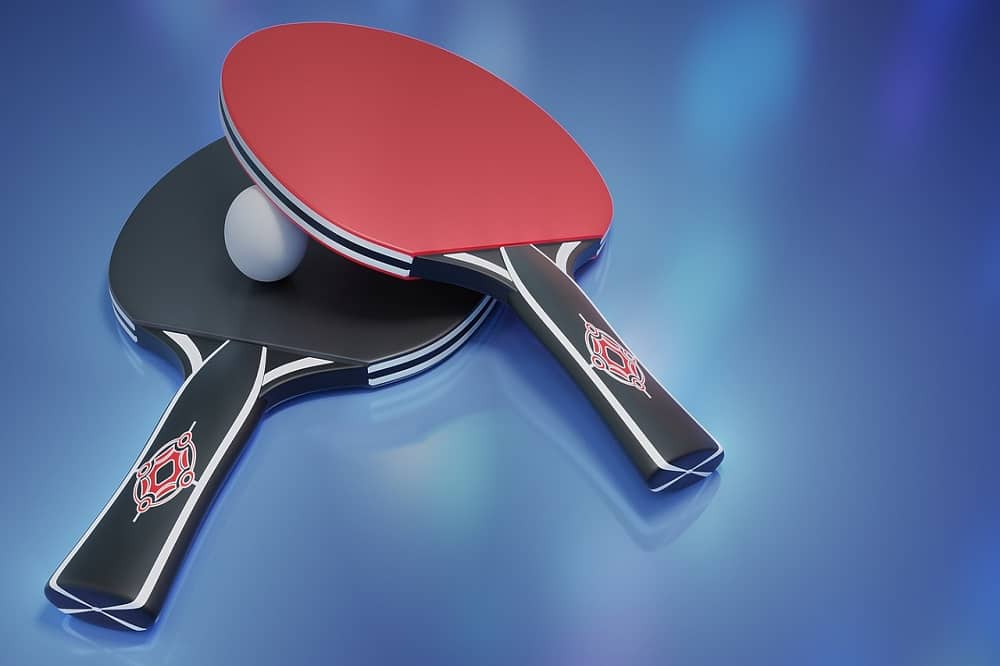 Beginner players always ask me, “Why are table tennis paddles black and red?”

The answer is really simple: it’s one of the official laws set by the International Table Tennis Federation (ITTF). Why did they come up with this rule? And can each color impact your strokes? That’s what I’ll explain in this article.

As you probably know, table tennis paddles have rubber sheets on both faces. These sheets aren’t merely decorative; they can actually change several factors in your strokes, especially the spin. (I’ll explain this more at the end of this article, so stick around!)

In the ‘70s and ‘80s, players around the world started to make custom paddles that combine different rubber faces. But because both faces had the same color, players used to twiddle the paddle during the match, preventing their opponents from expecting their next shots.

It wasn’t until 1986 that the ITTF decided that each face must have a different color. To make the game completely fair, each player can inspect the other’s paddle before the game starts to know how each face will impact the stroke.

Additionally, both players can’t change their paddles mid-game unless they were so damaged that they negatively impact performance.

Does It Have to Be Black and Red?

Nobody knows why the ITTF settled on black and red. However, most people believe that it was a simple process of elimination: White would’ve made the ball indistinguishable. Blue and green were already reserved for the table. So black and red seemed like the most suitable pick.

Starting from October 2021, the ITTF will allow players to substitute red with any color they like, but it must be bright and distinguishable enough from the ball, according to the latest version of their handbook.

Do These Colors Impact the Paddle’s Performance?

Many people think that the black face always adds spin to the ball, while the red provides speed. That’s not necessarily true, though. The colors, by themselves, can’t change the way you hit the ball. Rather, it’s the rubber’s texture and tackiness that do all the work.

Both short- and long-pip rubbers have small projections pointing outwards, but these projections obviously differ in length.

The longer projections in the long-pip rubber can return the ball with an almost unpredictable spin, which is why it’s ideal for defensive players.

Short-pip rubber can completely nullify the spin effect, which should be perfect for strokes like the forehand smash.

Inverted rubber also has projections, but they point inward at the plate or the sponge. Consequently, the face that touches the ball is relatively smooth. By varying the tackiness, this rubber can be versatile enough to perform a wide range of strokes, which is why it’s the most common type on the market.

What About Naked Paddles?

Simply put, a naked paddle is the one that doesn’t have any rubber or sponge coatings — it’s just a wood blade. Such paddles offer the best resistance to spin. However, the ITTF doesn’t approve them for official competitions.

As you read earlier, the ITTF was the source of the 2-color rule. Since 1986, they were determined on red and black, but that will change in the second half of 2021: Players will be able to choose any bright color they like on one face, while the other face must remain black.

Remember, before you start the game, you should check your opponent’s paddle to know what type of rubber each color represents. This way, you can plan your defenses accordingly.